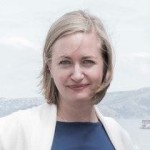 Johanna Nilsson, is a singer “slowly stepping out of the shower” and a full time entrepreneur, from Stockholm, Sweden.

She has a solid back-ground in choral music ranging from swedish music, pop and barbershop to world-music. She has been a member of The Rönninge Show Chorus (Rönninge, Sweden), Friedmans Apostlar at Stockholm School of Economics, The Swedish Choir in San Diego as well as most recently Keeva A Cappella in San Francisco, California.