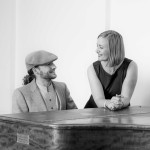 Dear Home Duet
The idea of Dear Home Duet, started with a conversation at Jazz in the Basement, in San Francisco. A hidden gem in the live music scene in the Bay Area, hosted by jazz singer Jesse Foster and his wife Michele. Grant Levin is one of the frequently returning musicians on piano, and Johanna Nilsson is a regular guest in the audience, also prior vocal student of Jesse’s.

The initial conversation was that the only Swedish song that Grant had previously played, was the jazz standard “Dear Old Stockholm”. The city where Johanna is from. One song led to another, and a year after, they met for the first time to explore some swedish folk tunes. Most of which are sensitive and beautiful songs about love. Dear Home Duet was created.

Grant Levin
Bay Area based Grant Levin is a multi-faceted contemporary pianist, band leader and writer of music who performs in various configurations from intimate settings to concert halls and festivals. His musical aesthetic is based on dynamics, showcasing the piano as an infinitely powerful instrument, allowing the audience to experience the sonic possibilities. Read more…

Johanna C. Nilsson
Johanna Nilsson, is a singer “slowly stepping out of the shower” and a full time entrepreneur, from Stockholm, Sweden. Johanna has a vast experience as a choral singer. She has competed internationally in barbershop with Rönninge Show Chorus, was a founding member of the Swedish Choir in San Diego, and performed globally-inspired music with Keeva A cappella in San Francisco. This is her first solo project. Read more…